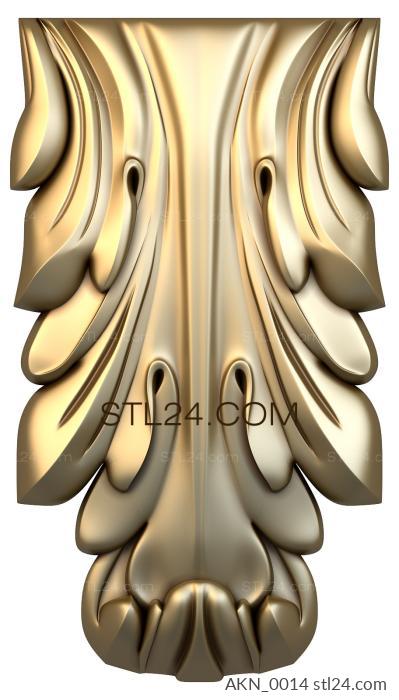 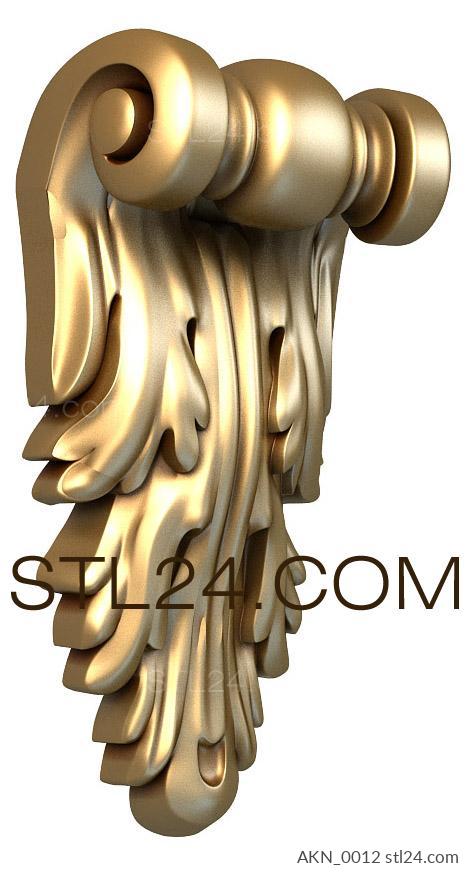 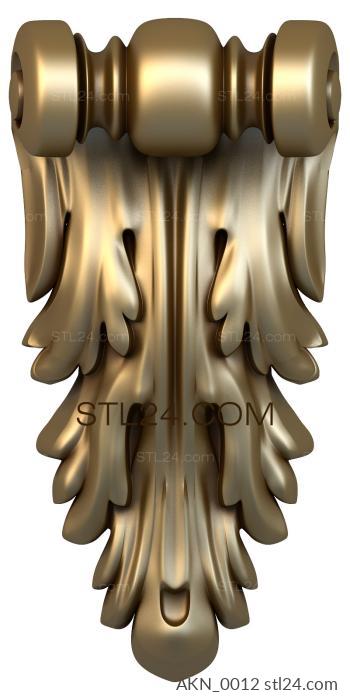 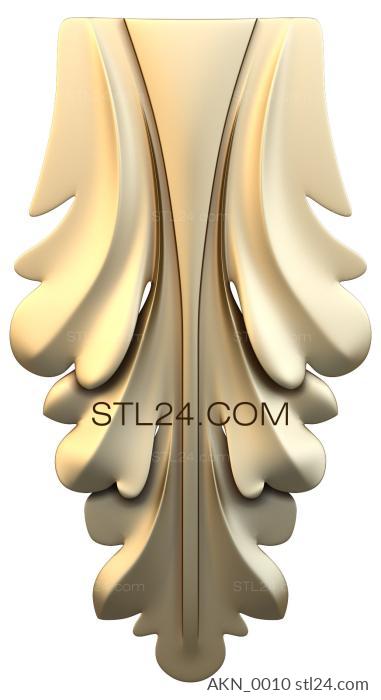 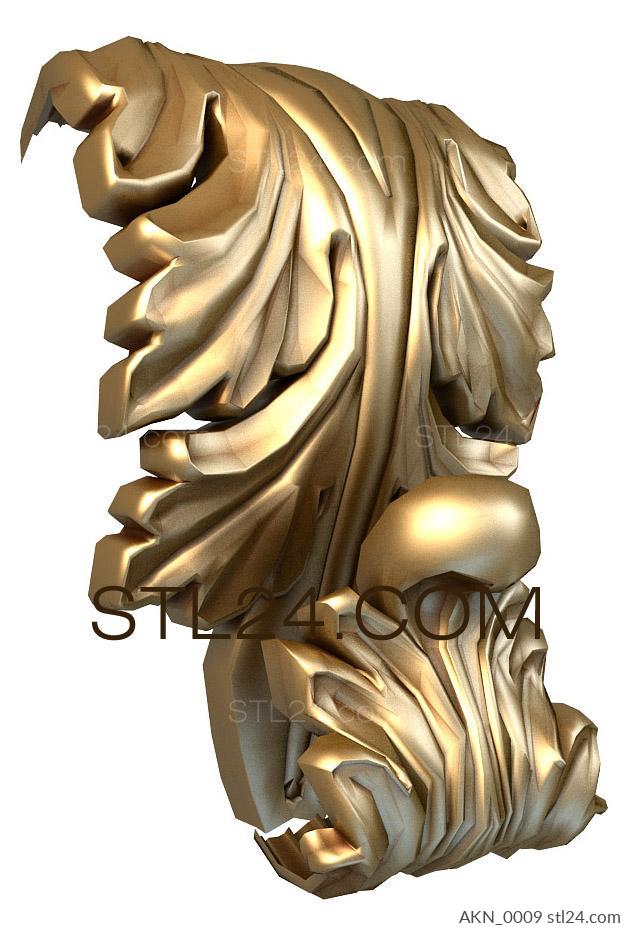 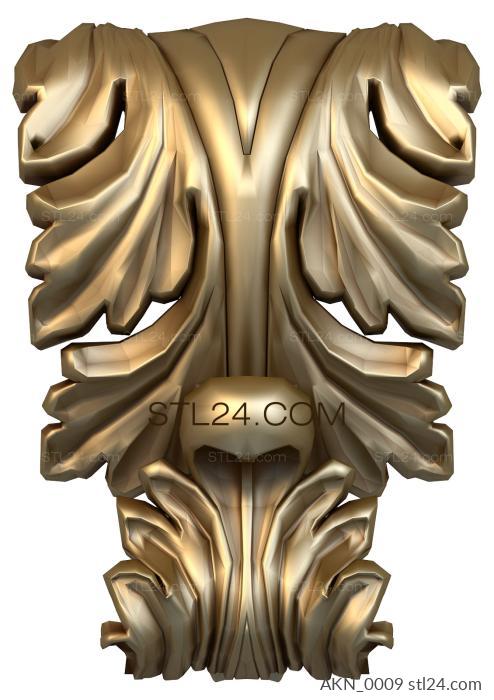 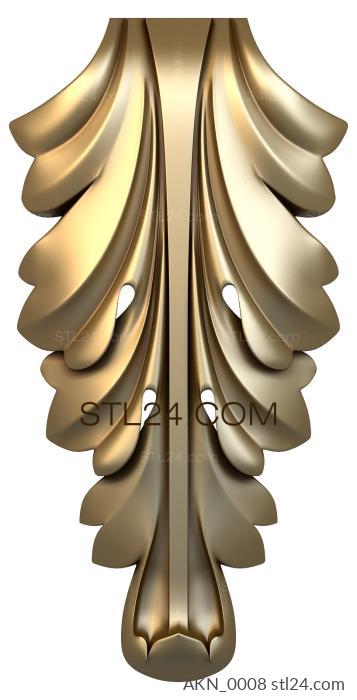 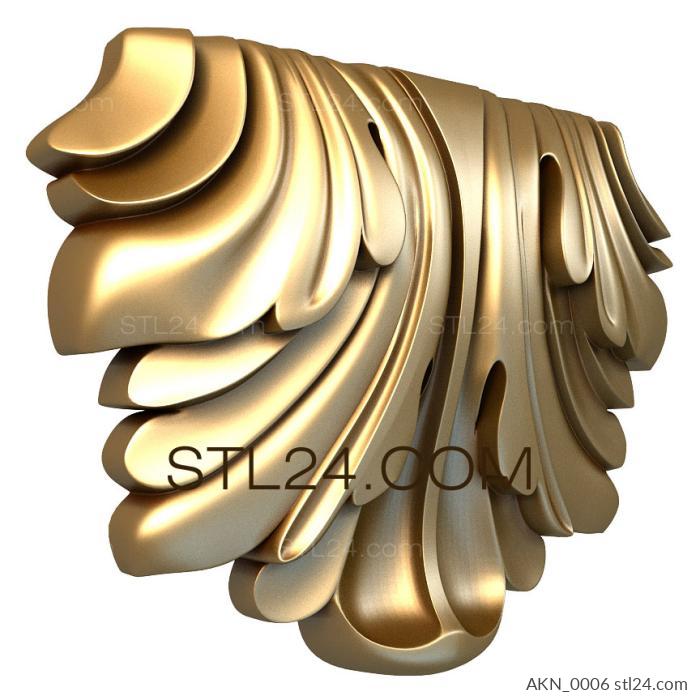 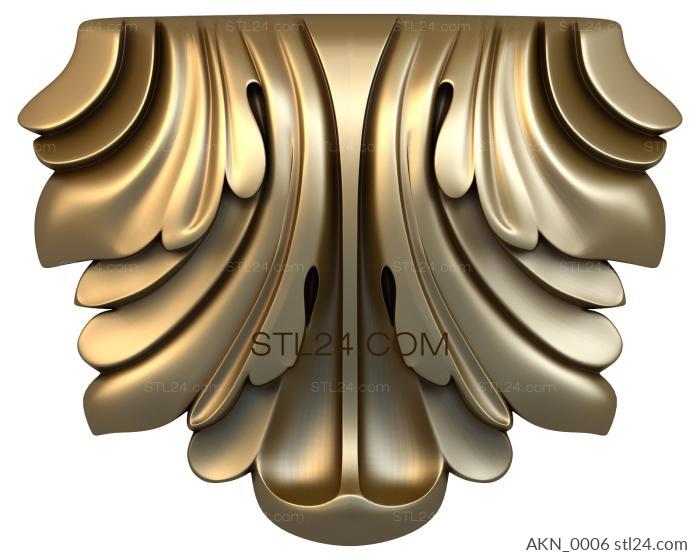 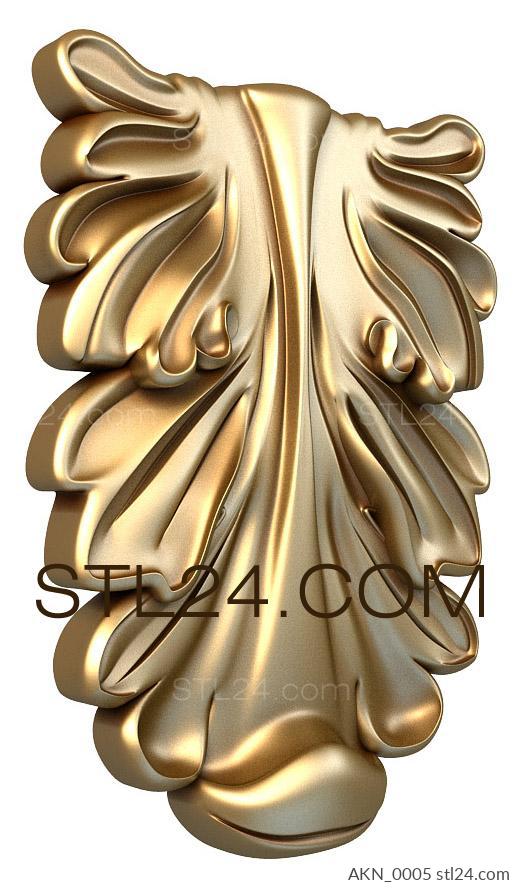 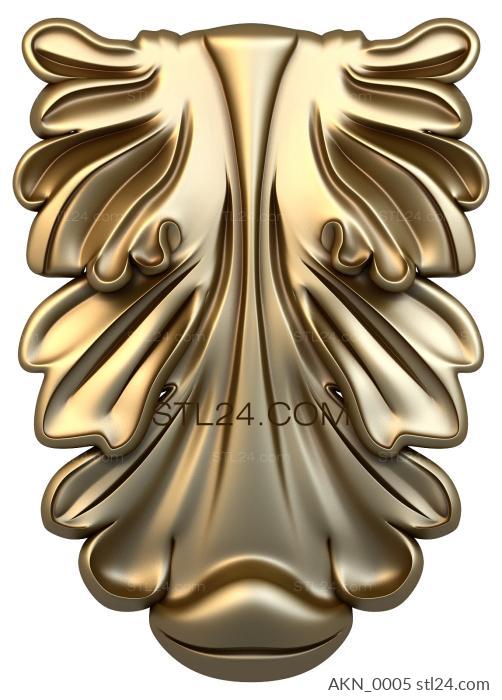 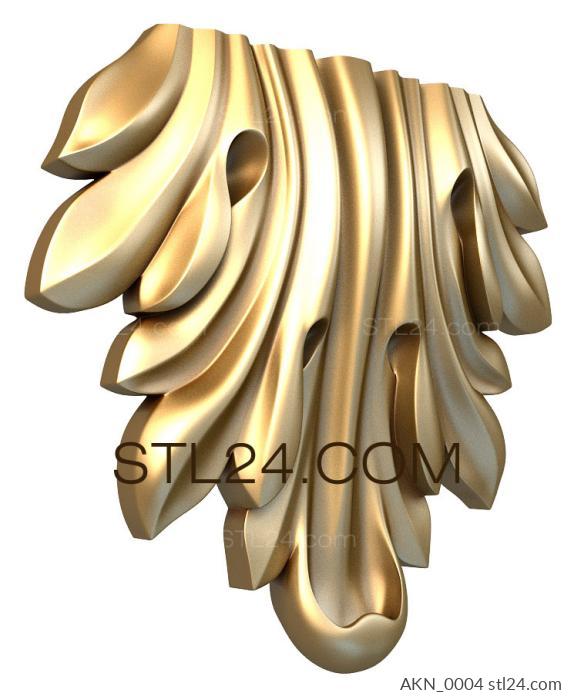 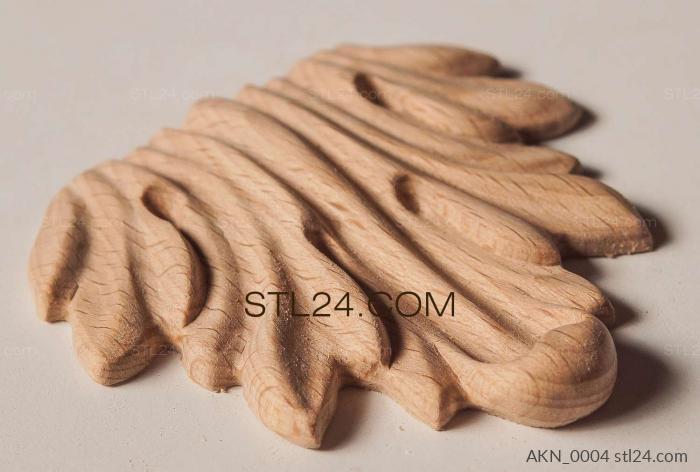 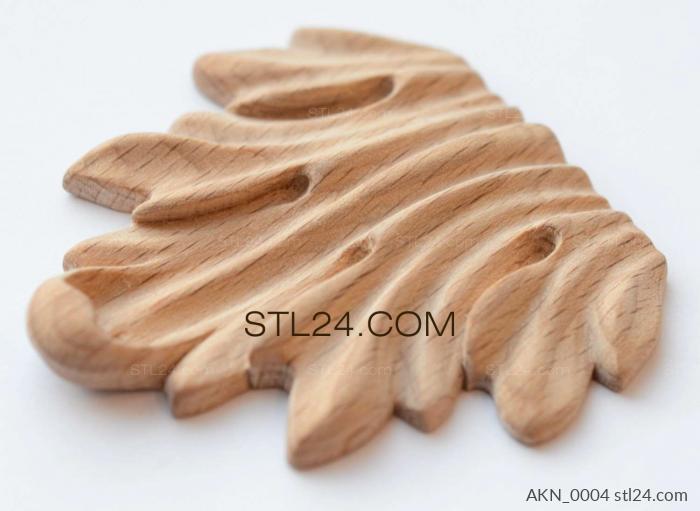 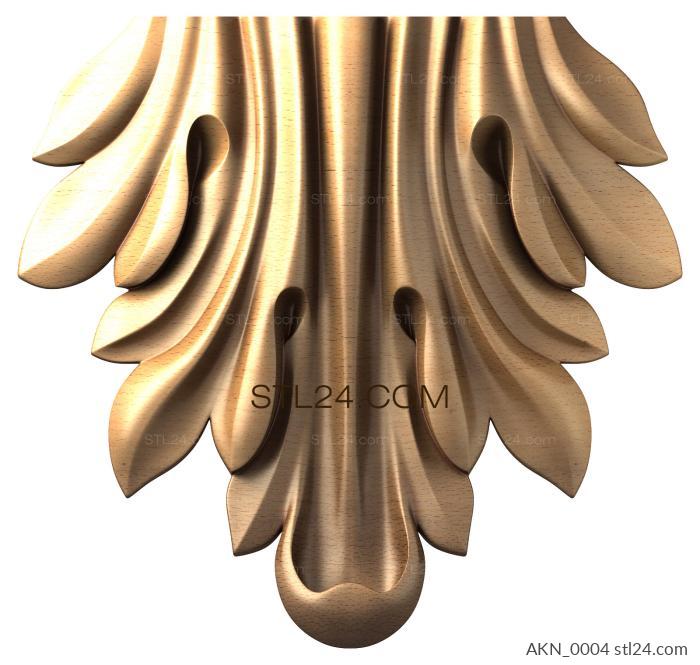 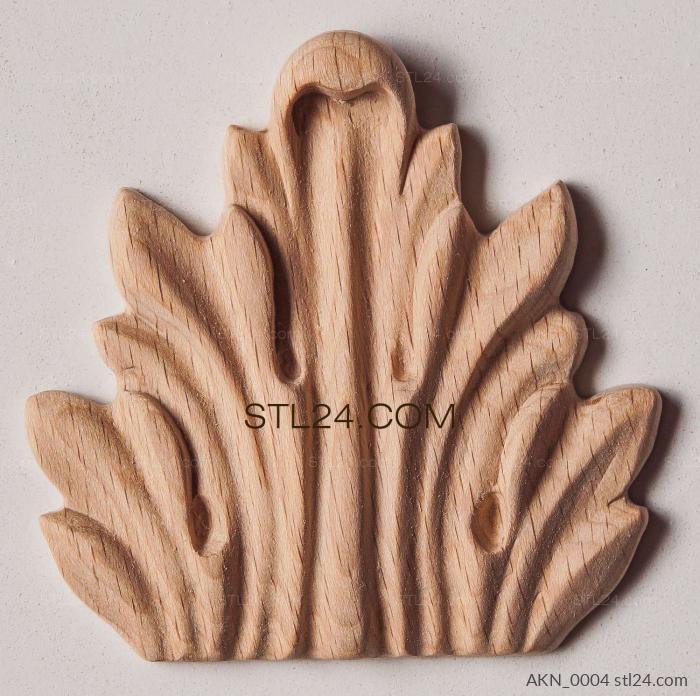 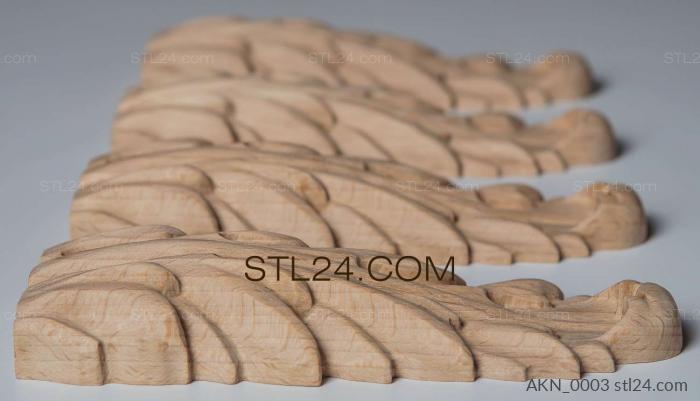 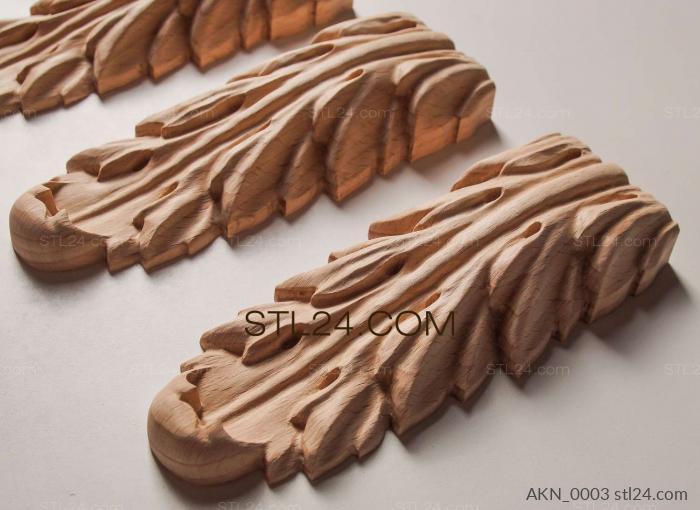 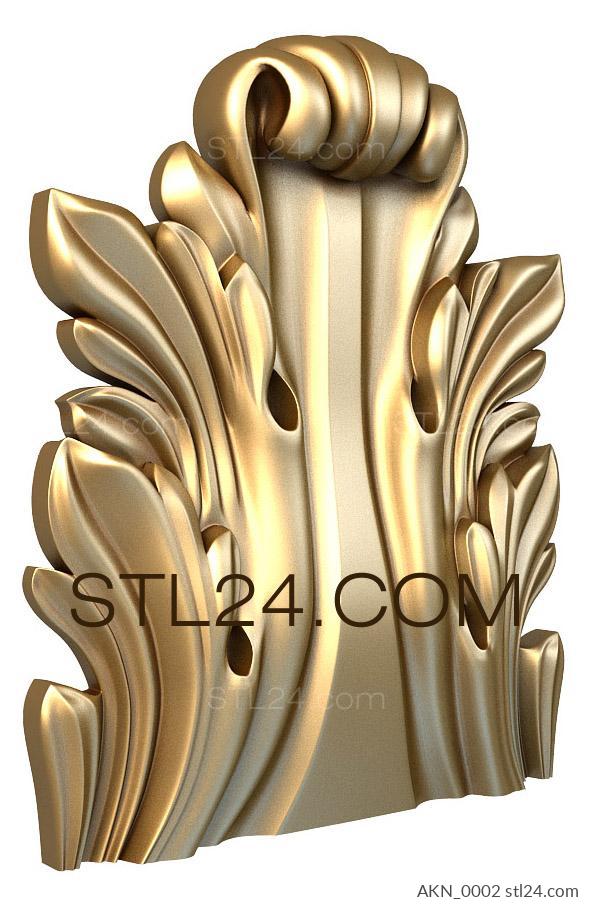 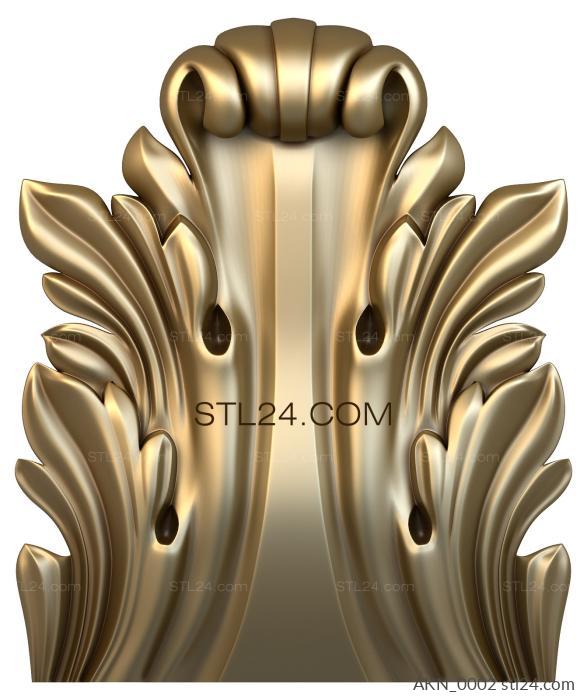 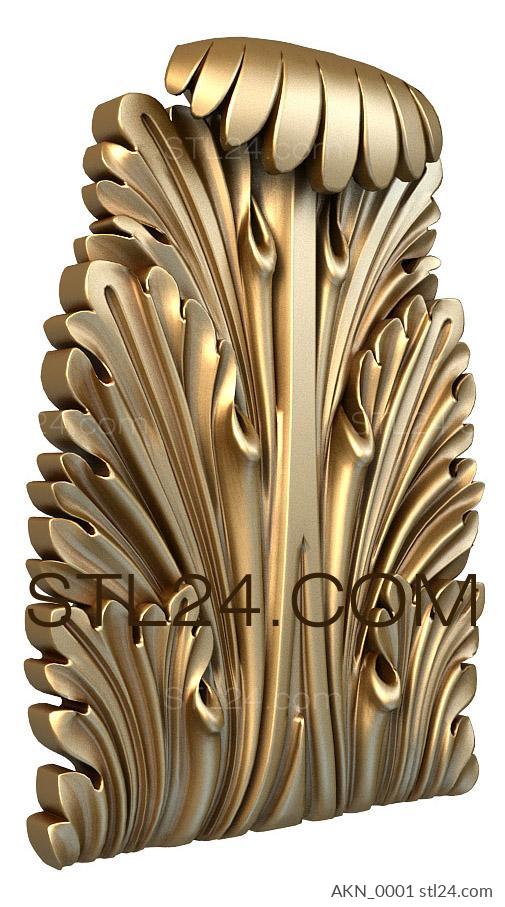 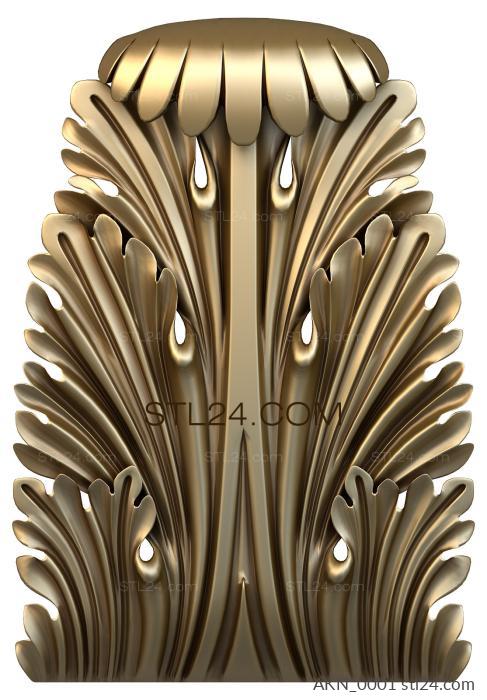 Model without anti-aliasing for editing

The acanthus leaf is one of a great number of ornaments you can purchase with us to create unique and elegant decoration of products made using a CNC machine or a 3D printer.

The acanthus is a popular ornament used in architecture and ornamental arts.

It is an image of a leaf of a plant of the same name. This plant is considered Mediterranean, although it also grows in Asia and Africa.

Its name is translated from ancient Greek as "thorn". The acanthus leaves are very peculiar and of a complex shape. Most likely, ancient Greek artists and architects were attracted by the symmetry of the lines, so this ornament came to be used on most of the chapiters of columns and buildings.

ACANTHUS IN ARCHITECTURE AND DECOR

According to a legend described in ancient works on architecture, the first artist who used the acanthus leaf to decorate columns was Callimachus. He was inspired  by the sight of a basket that had been left on the grave of a young girl. A square tile had been placed over the basket with her belonging to protect them from the weather. An acanthus plant had grown through the woven basket, mixing its leaves with the weave of the basket creating a unique natural pattern. Since then, the acanthus leaf came to be used on chapiters.

The acanthus ornament is so attractive for its plasticity, symmetry, wavy smooth curves. Such shapes are closely associated with the Greek and Roman culture, so no surprise the acanthus leaf was widely used in the ancient times, and later reached European culture.

Acanthus patterns are extremely common all over the world. They have been used in decorative arts and architecture since the times of Ancient Greece and Ancient Rome. Over time, the acanthus began to be used as a print on fabric.

The acanthus leaf is considered a symbol of art.

The acanthus, despite its prototype, has many variations. In Greece, the acanthus leaves were sharp and prickly, in Rome – rounded and soft. What’s interesting, it were the Romans who came up with the idea of folded ends of the leaves, which became a favorite decorative element for their magnificent buildings. Gothic style made the leaves look like pointed arches, while the Renaissance brought smooth contours back.

This acanthus was not devoid of sacred meaning. In the Middle Ages it was associated with thistles and thorns of Christ and therefore was actively used to decorate religious articles.

Each era, artist, and master brings something of his own to the acanthus pattern, thus creating a new decorative element.

The acanthus leaf has its own symbolism. In Greece and Rome it became a sign of triumph and overcoming life's trials. No wonder, because this plant is distinguished by long, strong thorns, emphasizing the idea of its strength.

Interestingly, there is another Greek myth saying that the acanthus marks the graves of real heroes.

The acanthus used to decorate architectural structures and columns, but today it’s most often used in the manufacture and decoration of the following:

This pattern is appropriate in classic and Neo-classic style, as well as Gothic, Empire and other classic styles.

We offer at least 10 acanthus variations. But that’s no limit. We can produce a 3D model according to your sketch, drawing, photograph, or text description. The 3D models from our catalogue can also be tweaked as per your design. Our modelling artists are happy to bring your ideas to life.

Our models can boast:

We are happy to answer your questions, give advice, grant discounts to return customers, as well as quantity discount. If necessary, we can develop a control program or tweak a 3D model for the required software, including 3D printers.

Call us or leave an online application. We will answer you via WhatsApp, Viber, Telegram, direct messages, or by phone.

Enter your e-mail,
we will send you a catalog
and a free model.